Power is central to the political crisis our country finds itself in today – keynote from Steve Reed OBE, MP 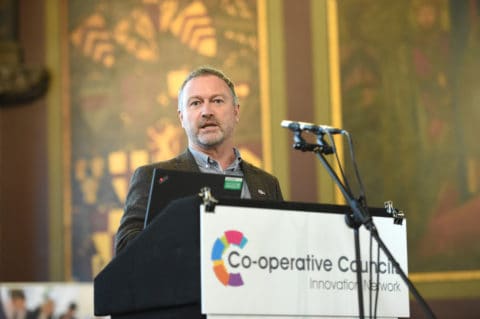 It’s wonderful to be back in Rochdale today for this conference.  As you’ve heard many times today, this is the place, 175 years ago, where the co-operative pioneers set about exploring radical new ways for people to achieve more by working together.  And seven years ago, in this town hall, it’s where we set up the Co-op Councils Network.  A new group of pioneers, taking the vision of those original co-operators and finding new ways to apply it in local government and local communities in our times.

Central to that co-operative vision is the concept of sharing power.  Instead of allowing one group to exercise power over everyone else, co-operators seek to open up power and use it collectively for the common good.

We don’t talk enough about power, but power is central to the political crisis our country finds itself in today.  Too many people feel they lack the power to make the changes they want to see in their own lives and communities.

We feel powerless in the face of jobs lost to automation or globalisation and replaced by low-skill, low-wage sweatshops or the gig economy.  Powerless as our high streets, libraries and youth clubs close down.  Powerless as we age and find the care services we need aren’t there any more.  Powerless as we face a rising tide of knife crime that’s killing young people on our streets.

For decades now, people have seen rising inequality and growing division.  The Brexit vote crystalised the sense of a country that works for some but not for so many others.  Brexit didn’t cause the divides, but it has crystalised them.

The problem is, leaving the EU won’t solve our problems because being in the EU didn’t cause them.  Our politics did.  It let too many people down, failed to stand up to abusive power and allowed too many people to fall prey to the interests of the powerful.

But power is a mysterious thing.  It’s not static, you can’t count it, and you can’t hoard it forever.  Ultimately, power comes from people.  If people withdraw their consent for a leadership, then even the most brutal dictators and systems can be toppled.   A revolution is the rapid transfer of power from one group that has it to another that doesn’t.

In a time when the grotesque inequalities of wealth and opportunity we see in our country are underpinned by inequalities of power, we are in a revolutionary moment.  And we must be the peaceful revolutionaries seeking to restore power to the people.

In the twelve years since the financial crash, the economy has continued to grow.  It’s made more money and generated more profit.  Yet, in that same period, real-terms wages have gone down.  The economy’s got bigger but working people have got poorer.  The proceeds of growth have gone to the most powerful at the top, everyone else has faced falling wages, declining living standards, and cuts in our vital public services.

That’s happened because the return to capital has grown while the return to labour has declined.  The two forces that drive our economy, once in a kind of equilibrium, are now moving apart.  Working people – have lost the power to demand and take a fair share of the proceeds of growth, so the rich get richer at everyone else’s expense.  And underpinning it is an inequality of power in the economy.

The climate crisis represents another inequality of power, because it hurts the most powerless hardest.  I visited Bangladesh and saw how rising sea levels are causing floods that are displacing millions of the poorest people on Earth.  I visited Africa and saw how rising temperatures are driving people off once-fertile land.  Here at home, the Extinction Rebellion is led by school children, the least powerful of us, who perceive that our generation’s failure to act threatens their generation’s right to a future.  Yet the powerful continue to frack and drill and pollute as if there’s no tomorrow, giving that cliché a sudden and alarming urgency.

But the digital world is also marked by an inequality of power that allows extremist political groups to target and groom the vulnerable, promote insidious conspiracy theories, find new ways to intimidate opponents.  And the rise of big data gives vast corporations the ability to reach deep into our lives to find new ways to manipulate us.  It’s no accident that the product advertised on your Facebook page today is the same thing you spoke about to a friend last night on the phone.  We have to find ways to democratise the digital revolution so its great power works for us, not against us.

There’s another inequality of power that’s closer to home for many of us in this room, because it’s in the public services we care about so much.  Under the Conservatives, public services have been underfunded, under-resourced and undermined.  Everyone in our Network is involved in a local authority that’s lost at least half its funding while demand for high-cost services like care for older people has gone up.  It places you in an impossible position.

But there’s another problem that’s not financial.  Too many of our public services are top-down.  Too often, we take decisions about tenants’ homes without involving them in any meaningful way.  We allocate services to vulnerable older and disabled people without giving them much of a say.  We search for answers to endemic problems like knife crime without intimately involving the young people and communities most affected by it.

This is also an inequality of power.  The state holds power too, but when the state believes it knows best and does things to people instead of with people, it gets things wrong, missing opportunities, creating deep resentment and stifling the insight and innovation of the people on the receiving end in a way that, to them, can feel frightening.

Add all of this up, and it’s why our politics can sometimes feel powerless in the face of the great forces reshaping our world.  Economic change, the climate crisis, the digital revolution, austerity.  But every single one of these challenges was created by human beings, so we have it in us to find answers to them.

Great challenges and great complexity can lead to a desire for quick and simple solutions, and we’ve seen that effect throughout history.  Blame the immigrants.  Close the borders. The rise of populism and nationalism is nothing new, its return is frightening because we have the lessons of the last century to show us the dark places it leads to.

So what can we do?  That, my friends, is where you all come in.  If an inequality of power lies behind the divisions we see all around us, then rebalancing power is an essential part of putting things right.  And since power derives ultimately from the people, and we are democrats, then the answer is to trust the people.  Our opponents, though powerful, are few in number.  Our allies, the people, are many.

The answers lie not in abandoning democracy, but in doubling down on it.  And the answers will not be found at the top, they must be built from the bottom up in every community and every neighbourhood and every workplace.

The political system we know was shaped in the post-war era in a world where change happened more slowly, it was more homogenous, more settled, more deferential.  The digital revolution has opened up data, information and our ability to connect with each other in unimaginable ways.  We can no longer do analogue politics in a digital age.  We need to remake our politics around people, and that’s where the principles of co-operation come in.

The powerful don’t co-operate with the powerless, they dominate them.  Co-operation has to be a dialogue of equals.  So we have to tackle the inequality of power and build new forms of decision-making that recognise and harness people’s innate power, building their capacity to participate in the decisions that affect them.

And isn’t that exactly what our co-operative councils are doing?

Here in Rochdale, the council has mutualised its housing stock so tenants have a bigger say in how their homes and neighbourhoods are managed.  In Oldham, the council’s ethical care company treats workers with respect and gives services users a voice in what happens to them.  In Croydon, a new land trust will give the community control over regeneration in their neighbourhood.  In Plymouth, the city’s network of community energy generating co-ops is tackling climate change from the ground up.

This is the new politics of the digital age taking shape.  Open, empowering, transformative.  What we lack is a government ready to join in.  But Labour is waking up to the scale of what’s needed.  In the coming General Election, we will be put forward radical ideas for new forms of ownership in the economy, a bigger voice for workers, democratic control of water, mail and rail, and a bold Green New Deal.

I’d like us to go further still.  Our country is in crisis because we are in transition.  The old politics can no longer deal with the scale of the challenges we face or the kind of society we’ve become.  It’s made people lose faith in the future.  We need to build a new politics that’s more open, more accountable, and more responsive day to day directly to the people it serves so instead of fearing the future, people can shape it.

That’s where we will find the answers to the challenges we face – by tackling the inequalities of power that hold people back, and allowing the creativity, energy and insight of our people to work together for the common good.  That’s the co-operative politics for the new age.  And its pioneers are here today in this room just as they were in this city 175 years ago.

Politics is in a dark place, but there is light in the work you’re all doing.  You are shaping a better future and offering hope to people who need it now more than ever before.  I look forward to continuing this journey with you.