Putting residents at the heart of decision making is fundamental to Norwich City Council’s approach to cooperative working and opportunities to put this into practice are explored whenever we get the chance. So when the local CCG came to us with a pot of funding and asked how they use it to create a whole systems approach to tackling obesity, Heartsease Healthy Living was born. 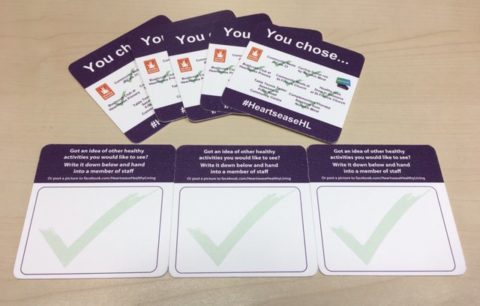 It began, as all cooperative projects should, with asking the organisations and services in Heartsease if they were interested in being part of that system with us to which there was a resoundingly positive response. Workshops were delivered to help the organisations find their common ground and create ideas for projects which might be impactful which were encouraged as partnership approaches with shared resources.

Decisions on which projects were funded through the first round of grants were made by the local community through a public vote (or participatory budgeting process). 220 people from the neighbourhood voted at voting boxes in the local church, GP surgery, local café and even the Vape Lounge. The placement of the boxes was considered so as to get the attention of the most residents and it worked as nearly as many people voted for the projects as voted in the local election!

Projects funded following support from the community include community meals, a cycling for mental health project, table tennis taster sessions and a Bushcraft club for children. A second round of grant funding based on community voting is planned for Autumn 2019.

So as not to simply fund and forget, the project created coasters for use in local cafes, community lunches and pubs which tell residents what projects they helped fund and lets them write on the back what the next projects should be. This feedback will then influence what the next funding round and keep residents at the heart of the project. #HeartseaseHL